← Made by Math
Four Dimensions and Untiled Faces →

From Tesla to Bjork 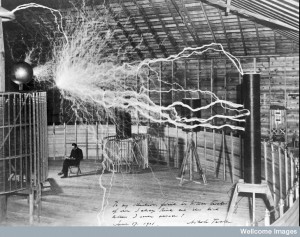 One of the most mysterious and genius scientists Nikola Tesla was an impressive performer. The photo shows Tesla’s Magnifying transmitter in  his Colorado Springs lab. Referring to the work of his contemporaries, Tesla stated: “The present is theirs; the future, for which I really worked, is mine.” More than one hundred years later Tesla’s coil performs a musical piece for Bjork’s Biophilia: http://www.youtube.com/watch?v=4AD6-NepHBI. Art and science perfection!

← Made by Math
Four Dimensions and Untiled Faces →

Atlanta's portal into the international world of new connections between art, science and technology

The Art and Craft of Blogging

The latest news on WordPress.com and the WordPress community.